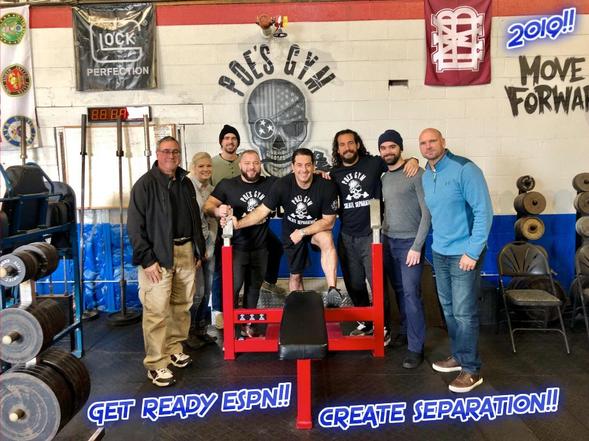 "I am so grateful, AT THE AGE OF 46,  to marc honan and espn,  for the opportunity to showcase the essence of poe's gym (our members) and to use my experience as a PROFESSIONAL overhead presser to serve others...truly a once in a lifetime opportunity...getting fired up for 88 million ESPN subscribers WAS A DREAM COME TRUE "---Matt poe

common questions after show was aired on espn

1. How much did matt poe weigh? HIS professional career body weight was 255 pounds. he was 258 when the show called him. he dropped to 242 pounds for the shoot.

3. HOW MUCH DID THE TIMBER BUNDLE WEIGH? The timber bundle normally weighs in at 225 pounds. to make the lift heavier, the bundle was exposed to water for two weeks moving the new, total weight to an estimated 250 pounds.

​4. HOW LONG DID MATT POE HAVE TO TRAIN FOR THE LIFTS IN THE SHOW? Matt had around 4 weeks to train for the two lifts. These lifts are not normally executed on the same day. each lift traditionally takes around 19 weeks to reach maximum pressing power.

5. does matt poe still compete? matt still has four fractures in his back WITH ACCOMPANYING NERVE DAMAGE, but, will do demonstrations from time to time.​

6. WHERE DID THE BARRELS ORIGINATE? after matt's back rehabilitation, he received an invitation to do a demonstration at the 2011 arnold classic in ohio with randy richie. Randy built the barrels especially for matt to make a return on the stage in a spectacular manner.

The show was shown 5 more times on ESPN, ESPN2, and ESPNU at various times.

After over 6 months plus of searching throughout the united states  for a story, Poe’s Gym was chosen to be the "Premiere episode" in the Gymratts series of shows on ESPN and ESPN affiliates.

As result of over one month of shooting and editing, producer Marc Honan and ESPN, will delivered the show focusing on:

4. MatT Poe’s back injury and recovery.

6. The host, Josh Goldstein, aka Farb AT @FARB.0, and his conquering of the Gymratt Challenge.

ESPN delivers a true comeback story about an elite, American athlete, Matt Poe, who overcame the odds of recovering from a NORMALLY CAREER ENDING back injury to use his battle and to use his passion for the Pushpress as an inspiration to anyone who has ever had any type of injury and was told, “you will never perform again”.

IN OCTOBER OF 2018, At age 46 and at 242 ponds (16 years after his prime and TRADITIONALLY LIFTING AT 255 pounds), Matt was contacted by ESPN’s producers of the show, Gymratts, and was given 4 weeks OF PREPARATION to execute his signature, overhead, barrel lift and another unique overhead lift, the timber lift, for THE GYMRATTS premier episode THAT LATER AIRED IN NOVEMBER OF 2018 DISTRIBUTED TO 88 MILLION ESPN SUBSCRIBERS.

The world-famous Poe’s Gym also is featured as one of the coolest underground gyms in America as the host, Farb, conquers the Gymratts challenge and poe's gym's General Manager, Josh Scott, offers nutritional guidance.